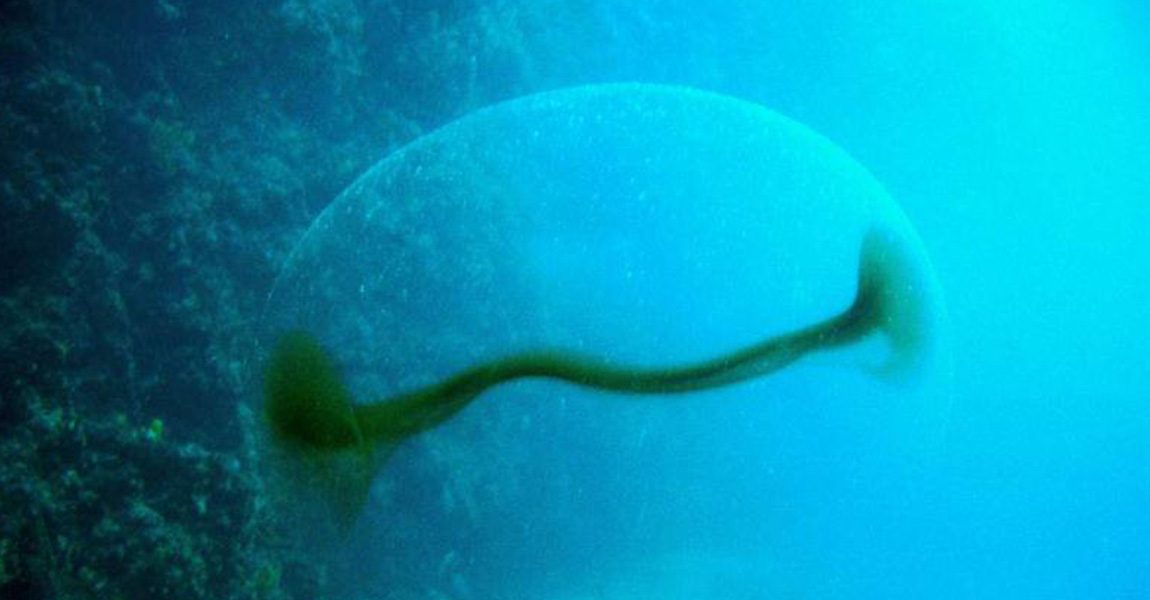 Divers take the opportunity to learn about an underwater world which appears distinctly removed from our routine, every day life. Although this submerged world is largely hidden from people, it is not immune to the negative effects of civilization. Through diving we can scratch the surface of this mysterious underwater world and better understand our relationship to it. Occasionally discoveries are made that help unlock the secrets of this world, which covers two-thirds of our blue planet.

In August 2005 we went for a routine dive at Muljica, a small island in the mid-Adriatic Sea, famous for its underwater cliffs, small caves, cracks, Gorgonia corals and many different schools of fish. As we submerged to the underwater precipice and looked down into the deep, there was a strange shape on the bottom, which reminded me of octopus ink used to deceive predators. Slowly sinking towards this unusual object, it became clear to me that it was something completely different from anything else I had seen before.

It was some kind of transparent oblong organism measuring about 1.5 meters long, and resembling a huge egg, sphere. Through its transparent outer covering, there was a brownish ”biblical cord” connecting the two poles of the long axis. This unusual organism, which could be right out of an science fiction movie, was freely floating in the water without any visible stalk or other attachment to secure it to the bottom. A small organism with big eyes came and looked at me from the inside of this ”egg” through its transparent membrane.

Although I wanted to touch it to feel the consistency of its outer covering, I decided not to disturb it in any way. Would it just sit there or would it paralyze me before swallowing me whole? Would it contact the mother ship to have me vaporized or sampled for DNA analysis? Using three underwater cameras, we took photos and footage of our discovery with the hopes of finding out more about this creature.

After surfacing to our normal terrestrial environment, we climbed on the boat and started discussing the mysterious organism. One of the divers was a Spanish oceanographer Roi Soage. Together we developed many different theories as to what the creature could be. Opinions varied from a giant jelly fish to a squid egg or some kind of appendicularian (one of underwater spaces). I decided to send the photos to the Oceanographic institute in Split and Dubrovnik for help with identifying it. The answer from the Oceanographic institute made things even more interesting, because no one there had ever seen this kind of organism before.

We then sent an e-mail to all of our Diving Center Pongo divers to enlist their help in identifying this organism, and the images made their way to the Ron O’Doru, professor of biology on Dalhousie University. He believed it to be some kind of the squid egg, and requested us to take a sample of it for DNA analysis so that its species could be identified. He also sent the photos to the scientist Stephen Haddock at the Monterey Bay Aquarium Research Institute.
( https://www.montereybayaquarium.org/)

This institute is famous for its deep water explorations and discovery of many deep water organisms off the coast of California. Stephen Haddock was also unsure about what the creature was, but he believed it to be some kind of egg. One of his colleagues, Karen Osborn, a biologist at the same institute thought it to be a ‘house’ of a Kowalevskiid, a family of appendicularians that secrete a large bubble-like mucus structure with a single, simple channel through the center. Stephen Haddock then sent the photographs to Monty Graham, Associate Professor of Marine Science, University of South Alabama. Although Professor Graham has been doing some research in Adriatic, he had never encountered anything like this before, but he thought the egg theory was plausible.

The photographs and interest made it all the way to NOAA (National Oceanic and Atmospheric Administration- https://www.noaa.gov/), which is one of the biggest organizations in the world for exploring and documenting different species in oceans around the world. After many more exchanges, we were no closer to knowing for certain what the organism was, other than that it was probably an egg of some sort.

Just when we thought the ?egg? would not be identified, I sent an e-mail to Dr. Steve O’Shea, Deputy Director Earth & Oceanic Sciences Research Institute from Auckland University of Technology( https://aenz.aut.ac.nz/ ) on New Zealand, who had seen eggs like ours before. Dr. O’Shea immediately sent us his article with photographs and an extensive study including DNA analysis from similar appearing eggs found off the shores of New Zealand. Their organisms were identified by mitochondria 16S rDNA sequential determination to be squid eggs belonging to squid Nototodarius gouldi, which was initially discovered by McCoy in the year 1888. Inside of the protective membrane of the Nototodarius gouldi egg are thousands of small squid embryos that are slowly developing. But the eggs from New Zealand appeared somewhat different from the photos we had taken in the Adriatic Sea.

The excitement generated by this discovery on a routine dive in the Adriatic Sea reminded me again that the expansive, enigmatic underwater world still holds many mysteries to be solved. As I was trying to remember the exact chain of events surrounding the day we made our discovery, I remembered that we had made a dive on the prior night at the lighthouse Mulo, not far from the place where we had found the egg on the following day. On that night dive I had photographed a few squid while they where hunting small fish. Maybe they made the egg we found?

One of the biggest dangers for this kind of free-floating egg is actually from human activities rather than from the sea. Fishing nets can rupture the membrane, releasing unprotected embryos into the sea, where they are subject to looting by opportunistic fish. By destroying just one of these delicate eggs, we kill thousands of future squid.

Other sea creatures use different kind of protective housing or egg for their progeny. The Cat shark, some kinds of apendicularians and ??snails?? also have eggs and would be more plentiful in the Adriatic Sea if coastal fishing methods were better regulated.

Divers come to Croatia from around the world to experience these beautiful waters full of life. In my opinion, it is much healthier for both the environment and the economy to keep Croatian underwater wild thriving rather than to empty the sea in a few years with reckless fishing techniques. Hopefully, then divers will get to experience the excitement of exploring the Adriatic Sea for many years to come, and maybe even to make a new discovery. 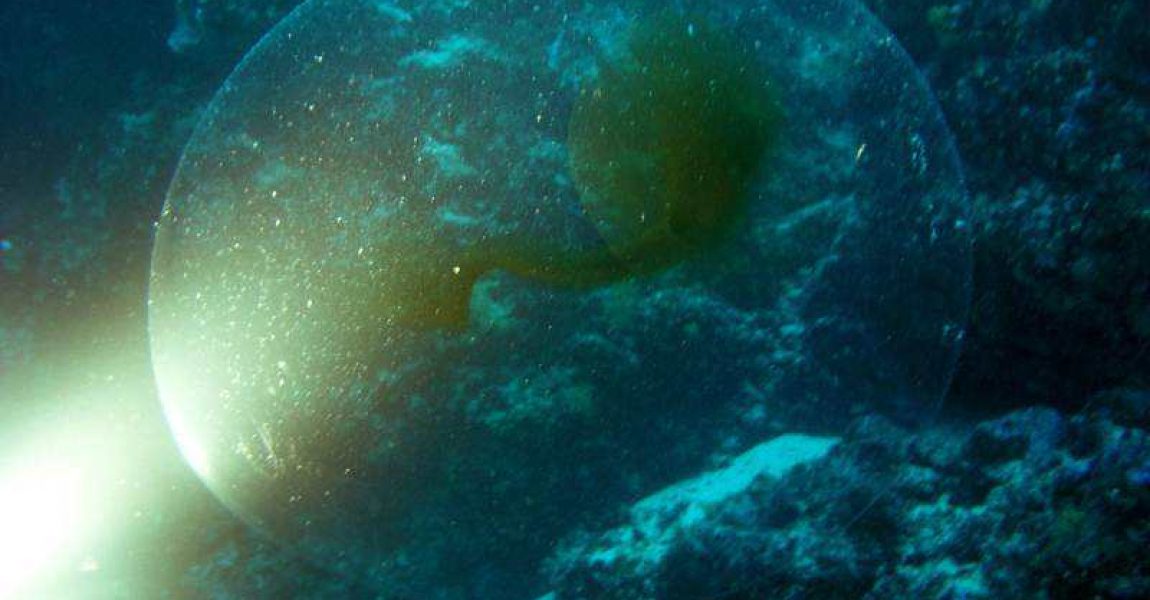 In 2018 mr. HalldisRingvold contacted us with interest in our finfing. He and Morag Tate made a scientific paper on difernt findings of this speaces around the world, tiltled:

This paper was published on 11. Sep. 2018 We are glad to help and participate in such a discovery. Read a full paper Egg mass of ommastrephid squid. Written by Borko Pusic Photography by: Roi Soage, Marko Prašek, Borko Pusic
PrevPreviousAlains cliff – the perfect diving story
NextOctopus are Smart, but WHY?Next

Feel free to contact us and book diving or find out all about the courses we run.