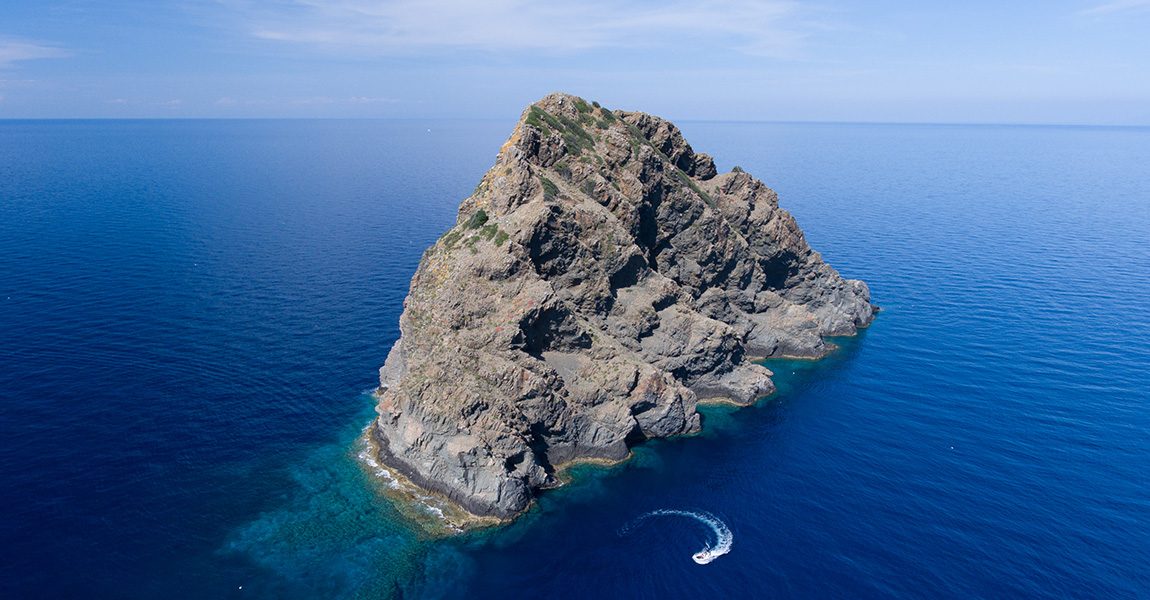 We worked through entire summer and head a great time. I must confess after more than 400 dives our team Roi, Vuk, Marko and me needed something special to fill our batteries again. There was an idea, which was slowly growing entire summer in our minds. Trip to Jabuka.

Jabuka is a small island in the middle of Adriatic mead of granite black stone and entirely black. It is 100 m high and you can swim around it in 30 min. From the time when I was a small boy, my father would take us there and it has always head a greater meaning in my family than just an island. You head to earn your way to Jabuka, through high sea, strong wind and lots of risks.Biggest problem is that there is no place to hide if the storm comes and everywhere is too deep to throw an anchor.

But one thing is for sure it is a divers paradise.

We head a full boat of divers entire week and in the afternoon we were sitting in the diving center and talking about how to organize tomorrow dives. Vuk came out and said ” but there is nobody on the schedule for tomorrow’s dive. We could not believe it, it was a first day off in two months. Everyone went quiet and there were just strange looks on our faces. ARE WE GOING ??…………… Let’s go.”

We started to arrange our equipment without a sound. Everyone knew where we are going to but no one wanted to say it. We filled all the tanks to 250 bar and Jean Pol’s 300 bar tanks as much as compressor could take. Everything was set for two dives and night was slowly coming.

We woke up at 04:00 and eyes open with a new glimmering, we knew we are doing something we will not forget. Even Vuk woke up on time, which is not his usual custom. Loading of gasoline, food, equipment, oxygen, first aid, gps, documentation and we were off in to adventure.

Sea, for a difference from last nights was a little ruff and rib was shaking a little bit, but the speed was constant 25 miles per hour. After we passed the V. Smokvica and the lighthouse Mulo we took a course toward the open see and direction Jabuka.

After 45 min I sow on the horizon a small growing black triangle which showed us a way. Coming closer I jell to Roj How do you like my church?.. Holy shit, it’s not a church it’s a cathedral.

We throw an anchor on Northwest side of the island.

Coldness, danger from sudden storms, black shadow with a look of a wolf fang are all the mechanisms of defence by which Jabuka is trying to protect its secrets.
However, once you submerge yourself under the surface and from the black surface enter the tirkiz blue water full of schools of fish, which hide in labyrinth of rock and caves you start to understand how beautiful secrets are hidden under anice cold face.

Gliding on the beginning through passages of rocks, we entered three caves, which are lit with streams of sun light from the cracks on the sealing. Roy and Marko where photographing while Vuk was peeking in to every whole. In this way we passed through constellation of rocks and we came to one stone we head to pass over.

Then suddenly and unexpected the huge cliff opened before us. Our eyes went wide and our breaths stopped for a second. The cliff fell directly from 0 to 100 and is visible entirety in one view. Crack after the crack, cave after the cave, fish, corals and so on for 50 min of diving on 30 to 45 m depth.

I was immediately conscious of that I’m in one of though moments about which I will fantasize and enjoy but we are rarely aware of them when they are happening. This consciousness and enjoyment in each moment mead this dive unforgettable.

Just as I was preparing to enter one cave I turned around to call Vuk and Roi to follow me, but I stopped frozen in the movement. The two of them where faced toward the cliff and just behind their backs ten Palamida (small tuna) around one 45 cm long where passing in gracefulness movements.

They passed us slowly and turned in to the blue slowly disappearing. They glowed on the sun like silver arrows. We slowly reduced our depth to 10 m and turned back toward the boat. Biggest problem is that the visibility is so good that on 13 m you think you are on 3m, so you have to look at your depth gauge a lot. Entire dive lasted 101 minutes and it was worth every second of it.

Taking our regulators out smiles went on our faces.

Tip home on entirely calm sea, after one more dive, while Jabuka was slowly sinking behind the horizon was jolly and full of stories. We filled our batteries and still though smiles have not gone from our faces.

Feel free to contact us and book diving or find out all about the courses we run.